The Popular program by Joe Rulli and Steve Bellinger returns.

The truth is out there. It can just be hard to find.

Napoleon Bonaparte once said that “history is written by the winners.” Often what we think is history is not.  Facts can be manipulated to make individuals, or a group of people look like heroes.  Sound familiar? As children of the 50’s and 60’s we played “cowboys and Indians” where the Native Americans were always the bad guys bent on doing evil to the innocent settlers. Where the Puritans landed at Plymouth Rock and made friends with the natives. Where Columbus discovered America. Where an altruistic Abraham Lincoln freed the poor slaves and instantly made life better for Black people. 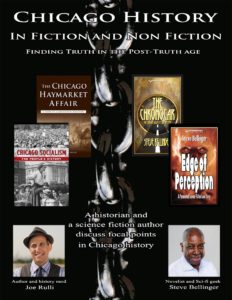 Then came the backlash. The cowboys became the villains. The Puritans were hypocrites. Columbus should have stayed home and slavery still existed, just in a different form.

The truth depends on who is telling the story.

In 2015, Steve Bellinger wrote The Chronocar: An Urban Adventure In Time, his attempt at the Great American Science Fiction Novel. When he decided to write a time travel story, one that deals with the recent past, he was faced with an unexpected challenge. The Red Summer Riot of 1919 is a major focus of the story with some parts taking place in the post Civil War South. He could have taken the easy way out by making all the White characters evil racists and the Blacks heroic victims. But his research and personal experience proved that that’s not always the way it was.

A number of books have been written about the Haymarket Riot of 1886 in Chicago. Who were the “good guys” and who were the “bad guys” depended on the writer. Joseph Rulli wrote his book, The Chicago Haymarket Affair (The History Press, 2016), as a definitive account of the events surrounding the Haymarket Riot. One of the things that is different in his book is that he used actual court transcripts and other reliable sources to help establish a clearer understanding of these events, and how they have shaped our current reality.

Joe and Steve have put together a unique presentation where they look at historical research in fiction and non-fiction in order to tell a fuller, more objective story of past events for the betterment of life today – sort of “History Nerd meets Sci-Fi Geek” to plead for reason and objectivity instead of playing the blame game when dealing with contemporary issues and problems.

In 2019, Joe’s latest book Chicago Socialism – The People’s History was released by The History Press. Also in 2019, Wordwooze Publishing published Steve’s second novel Edge of Perception – A Paranormal Science Fiction Love Story. Later, in 2020, Wordwooze published two more of Steve’s novels; e_pocalypse: The Digital Dystopia Is Coming and Time Waits For No One: The Chronocar Chronicles. Clearly, Joe’s book required extensive research and there was actually a lot of research involved in Steve’s novels.

In 2021, Rulli and Bellinger will reunite to present Chicago History in Fiction and Non-Fiction, an update to the 2016 program. Check back for details.

Have Joe and Steve present “Chicago History in Fiction and Non-Fiction” at your school, church, library, book club or other venue.  Download the brochure for more information.