When I was a young man in the 1960’s, we had wide-eyed dreams of the future.  Flying through space like Captain Kirk.  Computers and robots that do all of the hard work for us.  Two-way wrist radio.  Flying cars.  We imagined how cool it would be when all of these things were a reality.

But we never really thought about what  life would be like when all of the dreams came true. 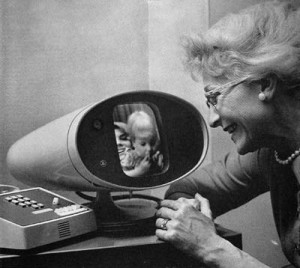 I remember staring wide-eyed at the prototype of the Picture Phone at the Museum of Science and Industry.  How cool would the world be when everyone has one of these?  Well, we have come far beyond this.  YouTube. Facebook. Skype.  Anyone under the age of 30 will look at the original Picture Phone and laugh.

So we have the technology.  What has it wrought?  Well, I can see and speak to Trevor in Korea whenever I want for free. Krystal who has moved to Paris, France, communicates with us and keeps us up to date on her adventures and accomplishments through Facebook.  It’s wonderful.

Then there is the otherside.  Cyber bullying. Tech savvy bad guys who video tape themselves committing crimes and put it online (never quite understood that).  Using social media to organize mobs of young men and women who subsequently terrorize the general public.

It ain’t all good.

Ok, I am not knocking it, but I have learned that desiring and dreaming of something is very different than actually having it.  Now, not only do I wonder what new technologies and gadgets are on the horizon, but I also worry about how people will use them.