45 years ago, when I was a student at Illinois Institute of Technology, I also had my own program on the campus radio station, WIIT. I was recently invited to reminisce about the “good ol’ days” by Sam Graham on his show “Living…With Sam Graham Lifestyle Show” on WIIT. Below is that interview.

During our discussion, I mentioned to Sam the theme I had put together for the program I hosted during my last year at WIIT. This is the theme:

Here are some memories from “the swingin’ 60s” put together by my  buddy and also former WIIT DJ, P.A. Porter. This is even before my time!

Podcasts of the actual programs below the article 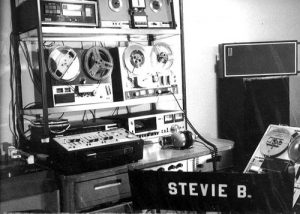 All my life I have been in love with radio.  Especially radio dramas and skits.  Even now I enjoy listening to “old-time” radio programs.

On Halloween night, 1968, I was a freshman at IIT.  WMAQ radio was playing a re-broadcast of Orson Welle’s “War of the Worlds,” in honor of it’s 30th anniversary.  I turned out the lights and listened.  Scared the heck out of me.  I wondered, how scary would it be if it were done in a modern setting?  I decided then, I would someday make a modern version myself…

In the late 70’s, I really got into audio.  So much so that I started making my own little “radio skits.”  About 1977, I recalled my dream of creating a modern-day version of “War of the Worlds,” and started to prepare myself.  In 1977 and 1978, I produced several radio plays, using professional actors, honing my skills.  This is when I wrote, directed and produced “The Ephemeral Man,” and the two comic murder mysteries, “The Case of the Alphabet Mugger,” and “Murder on the Evanston Express.”
Also, late in 1978, I began what turned out to be almost a year long project, writing the script for “Day of the Martians.”  In August, I began production.

For years afterwards, “Day of the Martians” was heard by many, on small college radio stations and in front of audiences, including a full house at the Chicago Public Library Cultural Center.
So the question is, if it is such a big deal, what hasn’t anyone heard of it? In the mid-1980’s, I finally got the nerve to call National Public Radio.  I told them I had a modern version of the War of the Worlds that many people have said was better than the original. The nice lady at NPR said they could not use it, and warned me to keep it under wraps, because Steven Spielberg and just bought the copyright to War of the Worlds. So this is one of the few times you’ll get to hear this!

Day of the Martians was aired on Canadian public radio and online in 2014 thanks to “Captain Radio” Richard Summers and The Sonic Society.