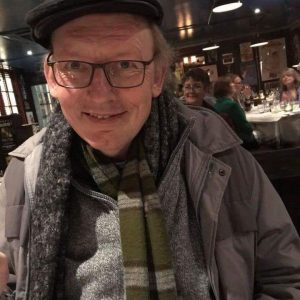 Dr. Lawrence Raw passed away today.  He was an associate professor at Baskent University in Ankara, Turkey. On his Facebook Page he described himself as “…an educator and learner since 1989. Lover of cricket, movies, me-time, food.”

So what is my connection with this British born professor of Literature?

Exactly 40 years ago this October, I unleashed upon the world my magnum radio opus, “Day of the Martians,” a re-adaptation of the classic “War of the Worlds.”  A few years ago, I hooked up with Richard Summers, otherwise known as “Captain Radio” who helped me re-introduce “Day of the Martians” through his website and more recently through the good chaps at The Sonic Society in Canada three years ago on thier website: http://sonicsociety.org/episode-443-visitations-from-mars/

Captain Radio emailed me one day with an incredible surprise. Someone had heard “Day of the Martians” on his website and had written a marvelous review. This person was none other than Dr. Raw, who was a fan of radio drama himself and had a website where he reviewed radio plays, new and old. And there, among the reviews of classic and contemporary programs from such revered sources as the BBC, was his views on “Day of the Martians.” His review was thoughtful and very humbling. The only real review ever done of my greatest radio endeavor.

I connected with Dr. Raw and followed him on Facebook. Though we only actually communicated directly a couple of times, I still considered him a friend and even fancied myself meeting him one day.

To Dr. Lawrence Raw; it was a pleasure (almost) knowing you!

Through the magic of The Wayback Machine website, below is a copy of his review of “Day of the Martians” from his now defunct “Radio Drama Reviews Online” website.

Day of the Martians: A Readaptation of The War of the Worlds by Stephen A. Bellinger

This is a real find from the archives. On the fortieth anniversary of Orson Welles’ famous War of the Worlds broadcast, Stephan A. Bellinger remade it for American public radio – at a time when funds were available for this purpose – and recorded on reel-to-reel tape. The action was transposed to contemporary Chicago, but the plot remained largely the same: the Martians invaded the world, causing chaos and in their wake, but themselves fell victim to the common cold virus.

Bellinger’s production intelligently contrasted the easy familiarity of the radio show presenter Jack Woods (Dave Whiskeyman), with the dulcet tones of the expert Dr. Shaw (Lee Webb), who tried to make sense of the invasion for the listeners’ benefit. As the production unfolded, however, it was evident that the Martians eluded rational analysis; they were something that no one had ever previously encountered. Contemporary Chicago was transformed into an un-reasonable world – one where the Martians’ invasion was described through a series of eye-witness reports, most of which were abruptly curtailed, as the communication connections were destroyed. On several occasions Bellinger’s production was interrupted by brief periods of silence: the reporters had been killed or maimed, and the anchor did not quite know how to keep the communication flow going. Such silences had a powerful effect on listeners, making us understand the consequences of what was happening.

As with most American productions, The War of the Martians was broken up into segments – allowing for commercial breaks – each introduced by an (uncredited) announcer, with the sound of Rachmaninov’s “Variations on a Theme of Paganini” in the background. Such interruptions helped reinforce the idea that the flow of communication kept being suspended, as the various reporters tried desperately to inform listeners what was happening, using any device they could lay their hands on – the radio microphone, the walkie-talkie, even the telephone.

In the end the narrative was taken over by Richard Pearson (Jim Keith), who recounted the end of the tale in tones strongly reminsicent of the wartime reporter Quentin Reynolds. He was a trustworthy person – someone we could rely upon to inform us how the invasion ended and what happened to the Martians. We were left with a final question: did anyone actually learn anything from the experience, or was it true that “the worst is yet to come?” Director Bellinger refused to provide us with the answer.

War of the Martians was a well-mounted production with a fast-moving narrative and a clutch of excellent performances. Although nearly thirty-five years old, it has certainly stood the test of time.

Previous Post: Excerpt from The Chronocar -1
Next Post: How to choose a book at a Lit Fest